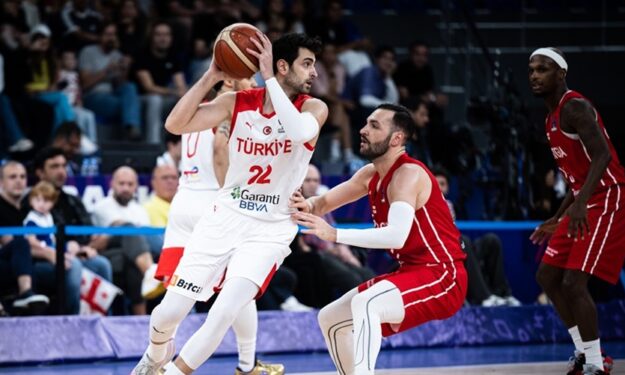 Beaten by Georgia (83-88), Turkey threatens to leave Eurobasket after reporting that one of its players, Furkan Korkmaz, had been the victim of an attack in the tunnel giving access to the locker room.

In Tbilisi, host of Pool A of the EuroBasket, Sunday evening gave rise to a sad scene. The tension was very high during the meeting. A severe altercation occurred on the field during the fourth quarter between Korkmaz and Sanadze.

The Turkish, player of the Philadelphia Sixers, was even excluded. The clock continued to tick for 22 seconds while play was stopped. This is also the subject of a complaint from Turkey. But the sequel will go up a notch.

In a press conference, Hakan Demir, assistant coach of Ergin Ataman, the coach excluded during the meeting, spoke about this incident: « We came to play basketball here. It’s a big scandal. It’s not desirable for the sport to have this kind of team (Georgia). What happened in the tunnel or in the locker room, is not sport. We expected more hospitality and gentlemanly behavior. We are sorry and we are annoyed. We came here as friends. On the court, there are tensions between players. Ok, something happened on the field. But after running after our players, three Georgian players and security, are involved in a fight. This is not acceptable. »

Via the Turkish media Sportx, Omer Onan, vice-president of the Turkish Basketball Federation, accuses FIBA ​​of not having ensured the safety of the players and demands that the images of the CCTV cameras be quickly published otherwise he threatens to leave the competition in Tbilisi.

“Let them bring all the images of this corridor in front of us, minute by minute, without wasting a second, insists Omer Onan. If they do not bring them, I have spoken about it with President Hidayet, we will leave this tournament. We’ve held the European championships for years, no one has been hurt. Here, 12 players are in the corridor, we’re almost going to fight with the Georgian police… We say ‘open’, they don’t open The Georgians come to discuss behind… The biggest mistake here comes from FIBA ​​There have been a thousand failures since the day we arrived The players go from the hotel to the arena in 45 minutes If you don’t can’t keep the players safe, you’re not doing your job We’ve spoken to the president of Hedayet We’re asking for safety Obviously they’re not protecting us Like I said they’ll bring the tapes from all the cameras in front of us, we’ll see what happened… Everyone will see it. do not provide them, we will leave the tournament. » For the time being, FIBA ​​Europe, organizer of the competition, has still not spoken.