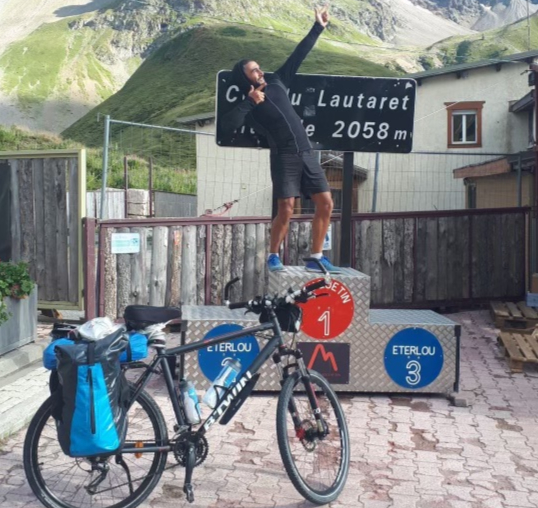 In less than two months, Balkher El Hanouni has reached Turkey, alone on his bike but accompanied on social networks. Interview from Istanbul.

His dream is to cycle around the world. The Amboisien Balkher El Hanouni has advanced in his business by traveling all over Europe to Turkey. Father of three children, truck driver by profession, the man is generous and full of hope. He broadcasts his exploits on his TikTok @btms.off account (115,000 subscribers). Before embarking on future journeys, he recounts this last landmark adventure.

What was your course ?

Balkher El Hanouni: “I did 12,000 km from Annecy. I cruised the Mediterranean Sea in Italy, took a ferry to Patras, Greece, drove to Athens, then took the ferry back to Tchesmé, Turkey. Then I cycled to Istanbul. But you should know that I have an entry-level bike, not necessarily suitable. With my bags, I’m not far from 40 kg! I still passed passes, up to more than 2,000 m in altitude. I even took a liking to it, on the dish I get bored. It’s a bike trip, but above all a lot of adventure. »

What moments were significant?
“I went to La Scampia, the most disadvantaged neighborhood in Europe. I wanted to be interested, to do a little report for the networks, to collect testimonies from the inhabitants: it was very interesting. In general, everything is done in the moment. I never know in advance where I will sleep, what I will eat, how to wash. It all depends on the encounters I make, on chance. For the anecdote, I washed in the middle of fountains in Rome. »

Throughout the journey, you broadcast your journey on social networks. How has this helped you?
“I had this idea of ​​opening a TikTok account (btms.off) because I had little knowledge of video editing. Now people follow my travels like a series! It’s not always easy, it’s a lot of work in addition to the rest, but I take so much pleasure in doing it. In difficult times, I forced myself to turn on my live camera, and within minutes my community made me smile again. I have a great bond with them and that pushes me to surpass myself. Now, I would like it to grow, and that sponsors can also support me in my next projects. »

Exactly, how do you envision the future?
“I have plenty of other travel ideas! I plan to do France-Morocco round trip by bike, and other projects like Alaska-Ushuaia, around Africa… It’s a passion, I will go around the world. »