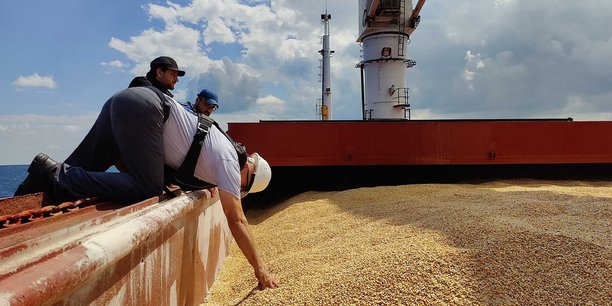 As part of the Black Sea grain agreement signed last July between Turkey, Ukraine, Russia and the UN, President Recep Erdogan insists on his country’s determination to process Russian wheat intended for from Africa.

“Putin said to me: ‘I give you the cereals for free and you deliver them to the poor countries of Africa’. And we say, ‘Okay. We will get these cereals from you for free. We will transform them into flour in our factories and send them to these poor countries in Africa. We are determined and we will make an effort to send these products to African countries from this grain corridor,” Turkish President Recep Erdogan said on Sunday January 8 at an event in Antalya, reports Turkish Radio Television ( TRT). A subject that seems to particularly interest the Head of State who was still talking about it on Christmas Eve in front of young people in Erzurum in the east of the country.

During a tete-a-tete on the sidelines of the G20 Summit last November, Russian President Vladimir Putin offered his Russian counterpart to send Russian cereals to Turkey for free, which would then be shipped to the countries from Africa experiencing a difficult food situation due to the war in Ukraine.

Mediator for the resolution of the conflict between Ukraine and Russia, Turkey signed in July 2022 with these two countries and the United Nations (UN) an agreement for the shipment of cereals from three Ukrainian ports on the Black Sea . Objective: to allow countries deprived of Ukrainian cereals since the outbreak of war in February 2023 to be supplied again. Last November, the agreement was extended for 120 days.

The Russian-Ukrainian conflict is a source of handicap for countries dependent on Ukrainian and Russian cereals, the two countries being the main suppliers in the world. Major consumers in the North of the continent, including Egypt and Morocco, rushed to strengthen their strategic stocks. But the countries less ready to take on these immediate challenges, particularly in the east of the continent, had to solve complex equations, then benefiting from various supports, including that of the African Development Bank (AfDB). According to Erdogan, the countries prioritized under the grain agreement are, among others, Somalia, Djibouti, Sudan and Mali.

As part of the Black Sea grain agreement, a joint coordination center for signatory countries and organizations has been set up in Istanbul to manage shipments from Turkey to identified African countries. A first shipment of cereals was announced last August, while Ukraine agreed in November to export 125,000 tonnes of cereals to four developing countries, three of which are in Africa, namely Nigeria, Sudan and Kenya.