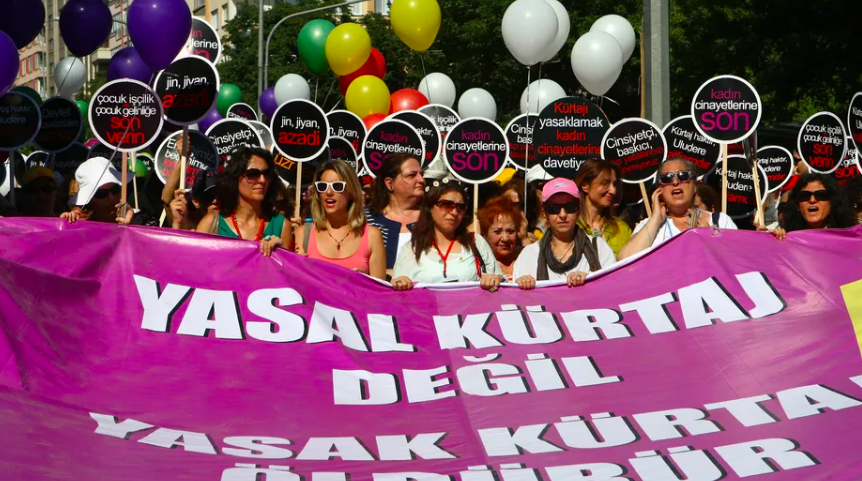 While we are debating in world the inclusion of the right to abortion in the Constitution, this right is in decline or threatened, in the United States and in certain European countries. As in Turkey, where abortion has become almost impossible.

Abortion has been legal in Turkey since 1983, and any woman can request it without having to justify herself, up to 10 weeks of pregnancy. In theory, always, the woman has a choice: public hospital, private hospital or private practice, as long as the voluntary termination of pregnancy (abortion) is performed by a specialized doctor. However, women’s rights NGOs have noted a turning point since a speech by Recep Tayyip Erdoğan in May 2012, a time when the president was still Prime Minister: « We are preparing a law on abortion », announced the head of government.

Faced with the mobilization of the feminist movement at the time, the government had to give up going through the law. But little by little, an informal ban was put in place in public hospitals. In 2020, only a dozen of them still practiced abortion, according to a study by Kadir Has University. In Istanbul, a city of 16 million people, only one public hospital still agrees to terminate unwanted pregnancies. However, no written instructions have been sent.

If the law has not changed, doctors who refuse an abortion do not risk any sanction. « In some hospitals, abortion is not performed on the decision of the head doctor. In others, it is rather a diffuse pressure where the doctors say to themselves ‘if nobody does it, I will not do it’. In still others, some would be ready to do it, but the medical team refuses, explains gynecologist Irmak Saraç, a leading member of the Union of Turkish Doctors (TTB). ‘free access to abortion’.

Hospitals or private practices are now almost the only recourse for abortion. But who says private, says expensive, and Irmak Saraç worries about those who cannot afford it: « We know that preventing abortions does not reduce the number of abortions performed in a country. On the other hand, that multiplies the number of abortions performed in poor conditions, by people who are not necessarily qualified, in places that are not necessarily suitable, she pleads.We also know that there is a product, Cytotec, which allows medical abortions to be performed .As it cannot be bought in pharmacies because it is only supplied to the hospital, some women obtain it from the black market.It is less risky than the knitting needles of old, but it remains that any abortion performed in an uncontrolled setting increases the risks for women, risk of complications, injury, haemorrhage, sequelae, even death.

And it’s not just abortion. Access to contraception has also become more and more complicated in Tayyip Erdoğan’s Turkey, in the name of a pronatalist policy which does not seem very effective: the Turkish fertility rate was 1.7 children per woman last year, compared to 2.4 20 years ago.