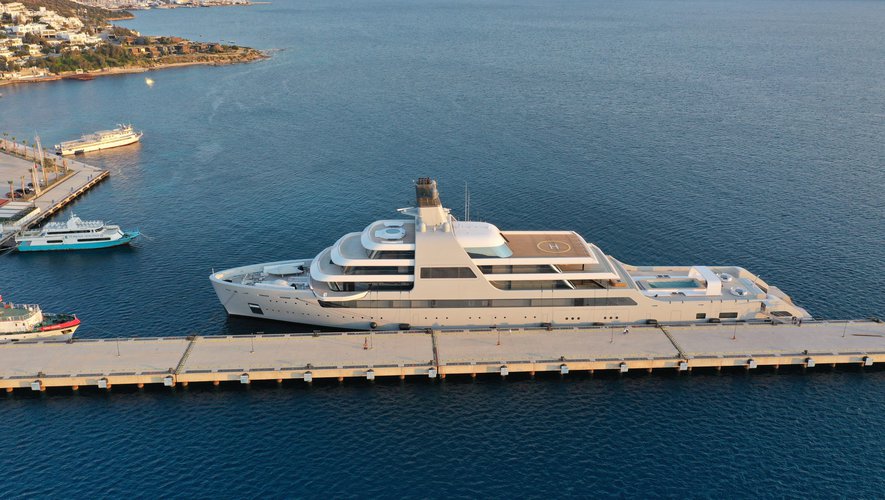 NATO member Turkey, which has close ties with Russia and Ukraine, has not joined in the sanctions targeting Moscow.

For several days, Roman Abramovich’s mega-yachts have been fleeing international sanctions, seeking refuge in a friendly port. After Montenegro, one of the yachts therefore stopped in Turkey, but a welcoming committee was on site when it arrived. His other yacht is still circulating in the Mediterranean Sea.

Data from maritime traffic monitoring sites showed that the superyacht Solaris is now on the Turkish coast, in the city of Bodrum after crossing the Mediterranean.

Solaris, a 140-meter-long luxury boat flying the flag of Bermuda, was filmed in the tourist town of Bodrum on Monday, more than a week after being spotted in a port in Montenegro, which is not a member of the ‘European Union.

In footage released on Monday, a group of Ukrainians on a small boat can be seen trying to prevent Solaris, a yacht owned by Russian oligarch Roman Abramovich, from docking in Bodrum, Turkey on March 21.

The Eclipse, another yacht owned by the Russian oligarch, with a length of 162 meters, is located in Turkish waters. He would not have found a home port yet.

War in Ukraine : The second longest yacht in the world, owned by Russian Abramovich, docked in Turkey

The Eclipse is one of two boats owned by the billionaire, owner of English football club Chelsea, which have moored on the Turkish coast. The country does not apply Western sanctions applied to Russians since the invasion of Ukraine.

Two yachts belonging to Russian billionaire Roman Abramovich have docked in southwestern Turkey, which does not enforce Western sanctions imposed on Russia’s oligarchs after the invasion of Ukraine, Turkish media reported on Tuesday. The Eclipse, a 163m-long luxury ship flying the flag of Bermuda, docked in the port of Marmaris on Tuesday morning, according to Turkish newspapers citing maritime tracing sites.

Billed as the second longest yacht in the world, Eclipse is the second boat from Mr Abramovich, owner of English football club Chelsea to drop anchor in Turkey. The Solaris was filmed in the tourist town of Bodrum on Monday, more than a week after being spotted at a port in Montenegro, which is not a member of the European Union (EU). A group of Ukrainians approached the ship in a rubber dinghy to protest the arrival of the Solaris in the Turkish resort, according to Turkish media. “You are not welcome here. No to war in Ukraine. Go on a Russian boat, go away! “, chanted the demonstrators, Ukrainian flag in hand.

Western countries, led by the United States and the EU, imposed unprecedented sanctions against Russia after the invasion of Ukraine, placing oligarchs, including Roman Abramovich, and relatives of Russian President Vladimir Putin on the list of targets of these retaliatory measures. NATO member Turkey, which has close ties with Russia and Ukraine, did not join the sanctions targeting Moscow. Even though she called the invasion of Ukraine « unacceptable » and positioned herself as a mediator to end the war.

Several countries have seized yachts belonging to the wealthiest Russians and US President Joe Biden has assured Moscow that the allies « will come for your ill-gotten gains ». Last week, the EU adopted new sanctions against Russia targeting in particular Mr. Abramovich. The oligarch is also hit in the United Kingdom by a freeze on his assets and a travel ban.

British sanctions prevented Roman Abramovich from selling Chelsea, the club he bought in 2003. His wealth is estimated at 9.4 billion pounds sterling (10.7 billion euros) by the British government.